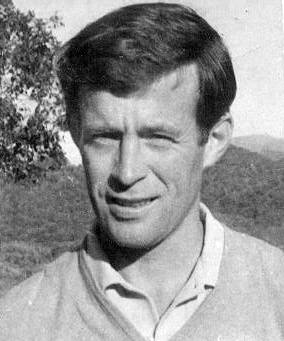 I will begin with a message from the writings of A.A. Thompson which Owen Davies enjoyed when I read it to him some time ago.

"It is strange that the daffodil, the flower beloved of gentle souls like Herrick and Wordsworth, should be the emblem of Wales, joyously combative characters as Owen Glendower and Wilfred Wooler. Gentle and sweet the Welsh may be in song, but in spirit they burn with rugged passion.

The golden daffodil turns, by some macabre metamorphosis, into a red dragon.

At Twickenham I have seen, at various times, fifteen of my Englishmen engage in a game of rugby football with fifteen Scots, fifteen Irishmen, fifteen New Zealanders, fifteen Springboks and fifteen Frenchmen. But I have never seen them fairly pitted against fifteen Welshmen.

On Twickenham's turf, and still more at Cardiff you not only have to play against the Welsh Team, but half the population of Wales as well, not forgetting the ghosts of the Welsh XV that beat the "All Blacks" at the Arms Park in 1905; the massed choirs of the principality singing magnificently; the brooding spirits of Parry Jones, David Lloyd George and Colonel Llewellyn's Horse "Foxhunter", of the Welsh Guards, The Welch Regiment and the Royal Welch Fusiliers. Down to inglorious defeat you will almost certainly go and your requiem will peal forth in the majestic strains of Cwm Rhondda and Sospan Fach."

I think that the reason Owen liked this was not so much because it was rugby, although that would obviously have had something to do with it, but because it so dramatically embodies his own attitude towards whatsoever task lay before him - that of total commitment.

He was not, of course, an unadulterated Welshmen himself - having been born in Karachi, of all places, - and having within his lines of decent various significant infusions of Anglo-Saxon blood. BUT his name was Owen Davies, he had spent his formative years at Llandovery College and his rugby had been coached by T P (Pope) Williams and Carwyn James. When people asked me therefore, as they often did, whether Owen was really Welsh, my answer was always –

In so replying, I was not thinking particularly of his fine ear for music, but rather of the unostentatious but thoroughly focused passion he brought to bear upon his duties as a Schoolmaster, as a Deputy-Headmaster, and eventually as a Head.

From a diplomatic or social intercourse point of view Owen was singularly ill-equipped when he first arrived to take up his post at Lilfordia. His immediate past record included stints as Chief Instructor at our Outward Bound School in the Eastern Highlands, and the Principal of a similar establishment in Hong Kong - and the Outward Bound movement does not rely too much upon kind words and soft soap in order to compel participants to achieve feats of which they believe themselves to be incapable. He was also completely out of touch with a new genus of Post-Independence parent who, somewhat illogically, expected their children to be successful without being subjected to any sort of pressure.

It would probably be going a bit far to say that Owen Davies was "joyously combative" in the manner of Owen Glendower - but he certainly did not shirk being confrontational if ever he felt that something was not being handled correctly.

To which idiosyncrasy one needs to add that he had a Celtic quickness of mind which baffled and frustrated slower thinkers, an awesome vocabulary, and a line of logic which he himself regarded as irrefutable. This meant that although he may not have won all his arguments outright, he certainly never lost any, and he always left his antagonist feeling somewhat inferior, and trailing well behind in the matter of points scored.

Unfortunately, in the times in which we live, the robust approach to life and its problems is not widely appreciated (or even understood) and during his first years at Lilfordia Owen Davies had his critics.

To whom one would have replied, if one had thought of it at the time, in the words of Theodore Roosevelt –

"It is not critics who counts, not the person who points out how the strong man stumbles, or where the doer of deeds could have done better. The credit belongs to the man who is actually in the arena. His face is marred by dust, and sweat and blood. Who strives valiantly, who errs and comes up short again and again. Who knows the great enthusiasms and great devotions - and spends himself in a worthy cause."

I don't know who, specifically, Theodore Roosevelt had in mind, but for me these lines say an awful lot about Owen Davies.

His great enthusiasm was for teaching in all its forms, his devotion was to Lilfordia School, and he spent himself to the full on these causes. His responsibility, as he saw it, was to get his pupils to achieve, to experience some sort of success in something, however apparently insignificant in itself, and thereby to imbue them with a measure of self-esteem and an appetite for further success. He did not automatically accomplish all that he had tried to do in respect of each and every one of the hundreds of small individuals who passed through his spheres of influence, no teacher who ever lived has done that, but it is safe to say that his overall success percentage would have been spectacularly higher than the national average if it were possible to produce figures on such matters. Nor would all his methods have found favour with the hopelessly theoretical, psychology-besotted egg-heads who seem to have gained control over education thinking the world over. The answer to such persons is, however, very neatly summed up in one of the obituary notices which appeared in The Harare Herald.

So wrote Lisa Bezuidenhout, Class of '89, and I can envisage no finer epitaph for any teacher.

Owen Davies leaves an indelible imprint on Lilfordia. His record as regards having his pupils accepted at the Senior Schools of their choices stands as a monument to his competence in the classroom and will be a hard act for anyone to follow; his incredible feat of making Lilfordia the team most schools most want to beat on the rugby pitch has been a recurring, perennial miracle if one examines the potential he had to work with. The proud history of his all-shapes-and-sizes colts XVs bears testimony to exceptional coaching in the face of daunting odds. Whether the various buildings, electrifications or water-related projects which marked his tenure of office as Headmaster will stand the test of time quite as well remains to be seen, because although he was an inveterable handyman his Welsh-accented "chilapalapa" was all but incomprehensible to those seeking to follow his instructions. These were, however, just his high profile exercises. In so many other different ways he was always volunteering, always contributing. Which, perhaps, brings us back to where we began - the man whose way of life was total commitment.

It would be wrong, however, to conclude on this note. Owen Davies was essentially an educationist, but was by no means the sum of his parts. He was a devoted family man, fiercely and justifiably proud of his unconventional but highly effective wife, Lyn; and his three talented children, Nicola, Kallin and Emily, whose exploits he followed avidly. He served both rugby and cricket at national level, he was a very active member of the Board of Trustees of the Outward Bound Association of Zimbabwe, he had climbed mountains all over the world and his lively, inquiring mind was vitally interested in virtually everything that was going on anywhere.

I have two memories which I will carry with me which would seem to encapsulate the Owen I knew. The first will be of our trip together in a hot air balloon during the course of which he not only seemed to know the correct name for every piece of apparatus on the machine, but also subjected our pilots to a torrid cross-examination as to how the thing could be expected to perform at various altitudes under all sorts of conditions - all this whilst at the same time spotting and identifying both features and creatures on the ground below before I, gazing inadequately over the side, could even begin to point at them.

The other was reported to me but is so typical I can see it quite clearly in my mind's eye. Apparently his last words before he died were a full-blooded tirade of criticism directed at our National Cricket Selectors for being so obtuse as to choose x instead of y for the tour to Australia.

It is a matter of sadness when anyone passes away but a tragedy when an exceptional man does as he approaches the height of his powers - when he had so much still to offer, both to his family and to a wider world. There is little one can say by way of consolation - but perhaps one can draw a measure of strength from the Outward Bound motto by which Owen Davies lived –

"To serve, to strive, and not to yield."


Photo : The photograph of Owen was sent to me by his wife, Lynn, in August 2002.  She had found it whilst clearing up some old papers. On the back is written "I certify that this is a true likeness of the applicant, Mr Owen Robert Walter Davies" signed (Bill) Bailey.  Obviously intended to be a passport photograph although, judging by the background, it appears to have been taken at the OB school in Chimanimani itself.  Perhaps sometime in the early 70's when he was in his early 30's.