Originally published in "The Bushman" - a publication of the Plumtree School Outdoor & Exploration Society.
Photos taken by Malcolm Hatley

TRIP TO THE CHIMANIMANI MOUNTAINS

After all meeting in Umtali, Rick's uncle took us from there via Melsetter to the camp at the bottom of Bailey's Folly. We arrived there at 9.00 a.m. in good spirits, hoping (in five days) to visit Southern Lakes; the Saddle; Eastern Lakes and Poacher's cave; Martin's Falls and finally return to the hut to spend a day in that area.

After handing in this itinerary to the game scout, we walked down to Dead Cow Camp and then began our climb up Banana Grove. We soon realised that getting to the top was easier said than done, and discovered our biggest mistake - we were unfit ! A brief stop at the top to recover from the climb, and to admire the view was most welcome. We pushed on and after getting lost for about half an hour (Nack's fault and mistake!) we arrived at Southern Lakes round about two in the afternoon. The string of lakes provided an inviting sight and we were soon cooling off in one of them. I was feeling sick (probably because of the heat) and kept on vomiting, so it was decided to spend the night where we were, instead of pushing on to Mucarera Cave, and to go to Martin's Falls via the hut instead of over the Saddle. Later on the afternoon we were threatened by black rain clouds, but a light drizzle only 'lasted five minutes.

That evening we discovered why Nack had been walking so fast during the day - his pack only weighed 20 lbs., about 18 lbs. lighter than ours (Rick, Hats and mine) ! Anyway, for the rest of the trip he lived like a king off our graze - he only had Pronutro, biltong, cheese, sweets, nuts, sugar and milk and he would have starved otherwise !

When I posed the question as to where the "toilet." was, I received the reply "om die hoek " (around the corner) and from then on this phrase seemed to be the common reply for every question ! We had an early supper and spent s couple of hours watching sputniks flying across the sky before dropping off to sleep.

The next day we moved on up the Bundi River (towards the hut) at an easy pace in case I became sick again. We were spurred on by the sight of some female figures in the distance - but we never managed to catch up with them ! We stopped at Digbie’s Dugout for a couple of hours for lunch and a swim and Hats managed to catch Rick and I off guard by taking a somewhat pornographic photo while we were having a "skinny dip". It attempted to rain again, but it soon ended and we were able to continue to the hut.

We spent the night there and were about to make an early start the next morning when Nack's folks arrived with a party (consisting of three families) who were also going to Kurasika and Martin’s Falls. We went ahead, over Skeleton Pass, up the Valley of Twelve Apostles (seen in photo), over the Dam Wall  and were stopped at Camp Portage by a heavy downpour. We were delighted (in typical Plumtree humour) an hour later, when a member of Mr. Ball's party fell into the river just below the Camp, when attempting to cross in a rather unstable place ! 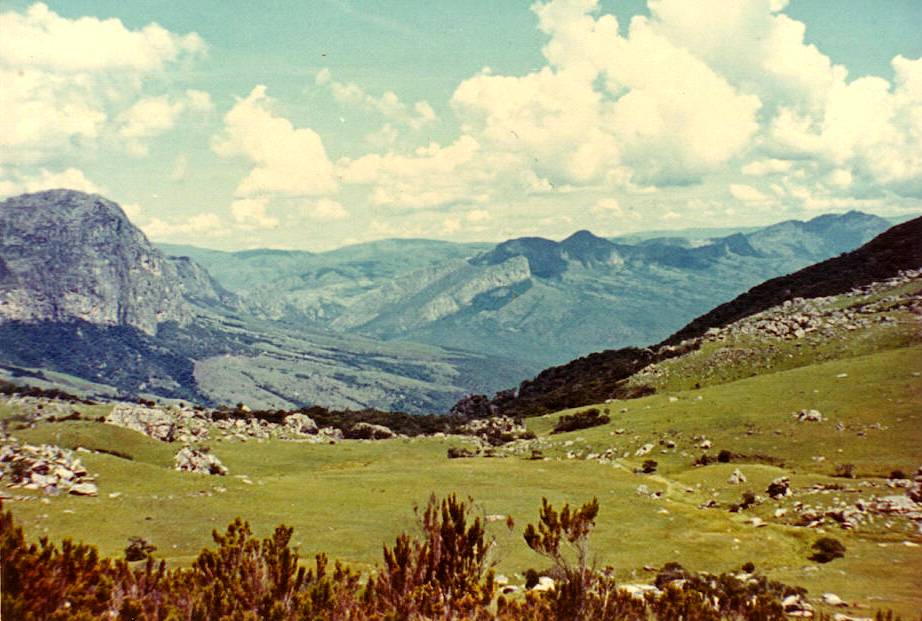 We continued along a rather soggy path and at one stage Rick sank up to his knees in mud - of course the rest of us were in such hysterics, he had to get himself out ! Another fifteen minutes walking brought us in sight of the beautiful Martin's Falls, plunging some 500 feet into the valley, away from and below us.

We arrived at Kurasika at about two-thirty and were allocated the "annex", a small sub-cave big enough for four people. (The' main cave is quite large and is said to hold 30 People at a squash). We spent the rest of the day organising our camp and walking around the surrounding area. Owing to our lack of swimming costumes (too much weight) we found our own private "swimming pool" where we could bathe without fear of possible peeping females from the other group !

That night we lavished over a six-course meal, consisting of sardines, oat porridge, soup, braised steak cheese and biscuits, ending off with coffee ! Later on we went down to the river to wash up the dishes and were quietly doing so (in the dark) when Rick gave a rather blood curdling scream, informing us that he had stood on a snake ! A torch, however, revealed an innocent frog looking somewhat disturbed after its ordeal ! Again, we were in bed fairly early, but stayed awake telling jokes and stories for a couple of hours.

The next morning after breakfast we set off for the top of Martin's Falls. We were unable to see very much from there and decided to follow the other party down a route to the base of the Falls. There was no path and the route was almost. a vertical drop of 500 Feet. Near the bottom we had to pass through some very dense, humid jungle and were suddenly confronted by a very big; beautiful pool below the Falls. After having a swim we tagged along behind the other group as we had no idea of how to get out of the steep valley and did not relish the idea of climbing out the way we had come. We followed the river downstream for some time and when the other party stopped for lunch, we continued as we had nothing to eat. We returned to the cave via Tucker's Falls and arrived there just as it began raining. The rain started blowing into our sector and the other party returned (soaking!) to find. us huddled under our groundsheets.

That afternoon was spent climbing using a rope which Mr Latham, a member of the other group, had brought up. Of course, we had to try to create some impression on the "birds" ! I got myself stuck halfway up and had to give up, but Hats did it in record time, with bare feet, and we are sure he would have put some of the local baboons to shame ! We were invited over to the Lathams for "dinner" that night so we spent the best part of half an hour bathing – even using soap ! We arrived in time to help with the cooking and were given a cup of sherry to share between us. We enjoyed the meal immensely and stayed behind while Rick chatted to the girls - we eventually had to drag him back to bed.

The next morning we were the last to leave on the return trip and there was a mad rush (with Rick in the lead) to catch up with the Lathams ! Once with them, we couldn't get Rick away, so Hats and I pushed on through to the hut and arrived there at about 1.30 p.m. (Nack was with his folks who were returning via Gemini Peaks and North Eastern Col). Rick arrived with the Lathams at 2.30 and we were sorry to see them leave half an hour later to return to Melsetter. Rick and I went down into the Bundi Plain to have a swim and we made sure we stayed out of the hut's view in case someone was using binoculars ! That night after supper, Rick tried, without much success, to charm another member of the fairer sex ! In the middle of the night we were nearly washed off the verandah by a thunderstorm, but survived without getting -too wet.

The next morning Rick left early for Southern Lakes to try and find some shoes he had left there the first day. When he arrived there, the place where we had been camping was under water owing to the rain and floods. (We later heard that James Maberly, on Outward Bound at the time had found them when passing that way with his patrol).

Rick and I left the hut in the early afternoon, leaving Hats to meet Nack and his folks who were taking Hats back to Umtali. We went down Bailey's Folly, reported to the scout and after a quick visit to the Outward Bound School, caught a lift back to Melsetter. We were both surprised to be permitted into the hotel there, considering our somewhat unpleasant appearance. The rest of the trip back to Bulawayo was uneventful and so ended a most successful and enjoyable trip, and in spite of all the hardships (?), we all hope to return in the near future with more time - and film.

As a special note, we would all like to extend our thanks to all the many people who helped in some way to make our trip such a success.